Johnny Ace and Kali Verra: In the spirit of Ed "Big Daddy" Roth 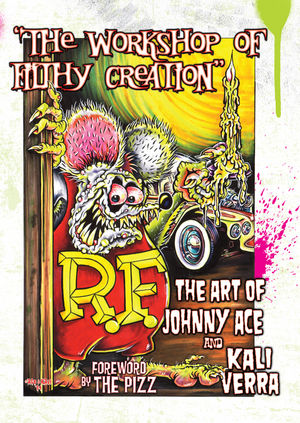 During my pre-adolescent and adolescent years (early 60s) in the surf-drenched, Kustom Kulture of Southern California, my counter-cultural hero was Ed "Big Daddy" Roth. I had a fever for monsters and hot cars and  Roth was the cure. I sent for his free catalogs, order several of his shirts and prints, assembled his Outlaw car and Mr. Gasser by Revell, wore a Rat Fink "crash helmet" and even spray painted my own monster t-shirts in high school. Roth faded from the scene and I moved on to the hippie and psychedlelic culture of the late 60s.
In the succeeding decades not much was heard of Roth and his Kustom Kulture, until it all re-emerged in the public eye in the 80s (The first Rat Fink Reunion was in December 1977). Roth returned to my personal vision in the 90s and beyond through the whole re-emergence of Kustom Culture and Roth influenced artists. I could see Roth in such artists as the Pizz, Todd Schorr, Dirty Donny, and Jim Phillips. The Roth influence, and the further development of the Roth-image, was obvious in artists like Ed Newton and Robert Williams, who worked for Roth. Some artists took the Roth influence into a new time. Not many kept the look and feel of those early Roth years of custom airbrushed t-shirts.
Another artist who worked for Roth, Johnny Ace, has produced, along with his partner Kali Verra, the classic look of the Roth I remember from my adolescent years. Other artists have done Roth-style work, but not like the work of Johnny Ace and Kali Verra. The airbrush work, bright colors, and traditional Roth images of monster and rods of Ace and Verra reflect the spirit of Ed "Big Daddy" Roth like no other. Their work evokes images and feelings of the early emergence of my counter-cultural sentiments. 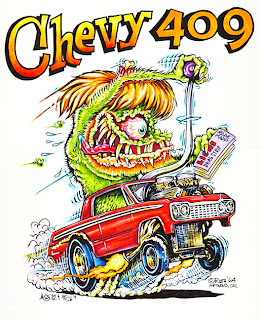 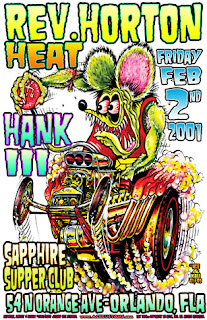 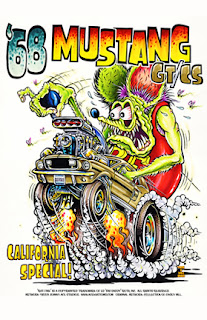 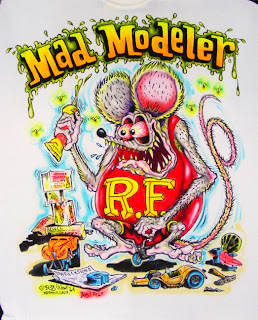 Posted by Leo Hartshorn at 3:45 PM No comments: