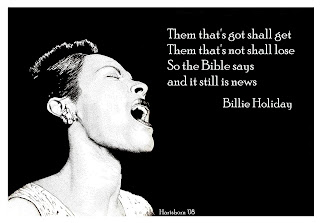 In her 1939 song Billie Holiday moaned “Them that’s got shall get/ Them that’s not shall lose/So the Bible says and it still is news.” The rich get richer and the poor get poorer. The saying is such a truism that it sounds like something from the Bible. In her 1939 song God Bless the Child Billie Holliday moaned the awful truth about the ever increasing gap between the rich and the poor.

During our current economic crisis it is easy to overlook that many in our nation have been in a perpetual economic crisis. The economic disparity in the U.S. doesn't come into our consciousness until we see it's ugly face, such as during Katrina in New Orleans. We didn't understand the violence and vulnerability the rest of the world experienced until 911. We still don't seem to understand the perpetual economic crisis of the poor, even though we have begun to taste the bitter brew of a recession.
The prophet Amos bemoaned the gap between the rich and poor in eighth century Israel. Amos was acutely aware of the chain link between the wealth of the rich and the poverty of the poor. In similar ways to today’s poor in the so-called Third World, farmers in eighth century Israel grew “cash crops” for the rich, such as oil and wine, which did not assist them in their daily survival. Peasant landowners were losing their land to the wealthy and becoming tenant farmers, while being charged excessive rent. They did not have the money to fight against these oppressive practices in the court, which was controlled by the wealthy. In order to maintain their wealth the rich “trampled on the poor” “took bribes” and “deprived the poor of justice in the courts” (Amos 5:11-12).

The oppressive gap between the rich and the poor is not just an ancient story. As Billy Holiday sang, “So the Bible says and it still is news.” Half of the world---almost 3 billion people--- live on less than two dollars a day. The Gross Domestic Product of the poorest 48 nations, one fourth of the world’s nations, is less than the wealth of the world’s three richest people combined. In the United States 13 million or one out of every six children is poor. In the 2001 census, the proportion of persons in Canada living in poverty was 16.2%, an estimated 4,720,485 persons. In the 1995 census, 55.6% of Aboriginal people living in Canadian cities were poor.
In the midst of our economic downturn, that is beginning to impact the middle class, we must remember that in our trickle-down economics little has been trickling down to the poor for far too long.
Into the gap between wealth and poverty the voice of God cries out good news, “Let justice roll on like a river, righteousness like a mighty stream!” Economic justice will mean more than bailing out Wall Street, U.S. car manufacturers, and other big corporations getting the middle class "back on track" economically. It will mean bringing poverty, race and class into our current dialogue and action concerning the U.S. economy. Only then can there be any possibility for economic justice. The government, corporations, and the middle class care for their own interests. The church is called to care for the "least of these."So the Bible says, and it still is news, good news to the poor.
Posted by Leo Hartshorn at 9:35 AM